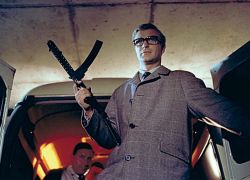 Film meets fashion at the Everyman Cinema Club in London on Sunday 11th February, with a screening of the classic Ipcress File and the re-launch of a range of vintage glasses from Oliver Goldsmith under the name A Spectacle of Fashion in Film.

The link? Well, Caine wore Oliver Goldsmith frames for his role as Harry Palmer in the movie. The label was re-launched in 2005 by the founder’s great grand-daughter Claire Goldsmith, with 10 vintage designs from the OG archive being unveiled at this event – and there’s a chance for attendees to win a pair of ‘Renzo’ frames, much-favoured by Michael Caine.

Also on display will be the original visitor’s book from OG’s previous Soho-based showroom which closed in 1976, signed by its customers including Caine, Peter Sellers, Ursula Andress, Nancy Sinatra and Nina Simone amongst others.

A Spectacle of Fashion in Film starts at 2pm, with tickets £12.

Find out more at the Everyman Cinema Club website