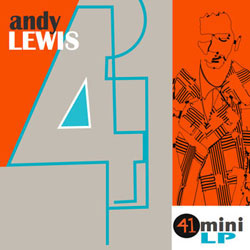 We mentioned last week that Andy Lewis was playing live in London, presumably playing a good chunk of material off his new 41 album.

A review of that mini album is now online, a selection  of tracks written and recorded in the latter months of 2010 and released as a separate project, ahead of the longer player he's releasing over summer.

Check out the review now, with the album available to download from iTunes now, followed by a physical release in May.