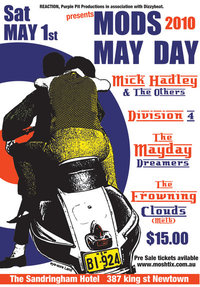 If you happen to be in the area and at a loose end on Saturday 1st May 2010, check out Mods Mayday 2010 at The Sandringham Hotel, King Street, Newtown, Australia.

Running from 8pm until late, the annual Mods Mayday offers up four generations of the Australian Mod movement on the one bill, with four live bands, DJ sounds for $15 admission.

Details of all the bands are over the page. If you want to know more, contact [email protected] or check out the Facebook page.

MICK HADLEY & THE OTHERS
Mick Hadley, lead singer of seminal Brisbane 60s punk/R&B outfit, The Purple Hearts hooks up with a bunch of ultra-talented Sydney-based musos to knock your socks off with some classic 60s punk and R&B rave-ups.

DIVISION 4
One of the coolest mod-revival bands of the early 1980s, Division 4 are back to remind you all just how good they were at creating smooth, modernist sounds with psychedelic and soul overtones. The dance-floor will explode when these hipsters take the stage.

THE MAYDAY DREAMERS
This will be the last hurrah for the much loved eight-headed pop behemoth that has proved to be such a winning combo over the past 12 months. They’re like Phil Spector meets The Jam and feature members of such classic bands as The Introverts, The Reasons Why and The Sets. Come along to pay your last respects.

THE FROWNING CLOUDS (Geelong)
Jetting their way up the Hume, these teenage reprobates, whose debut elpee has just been released on the Off The Hip label, are not to be missed. They have got the mid-60s R&B sounds of The Stones/Yardbirds/Eyes totally sorted and are the future of modernist music in this mighty fine land.