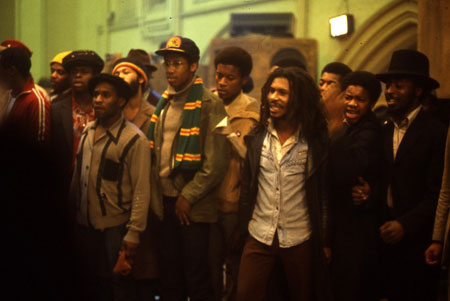 Not strictly mod, but sure to be of interest to many is the release of cult Brit flick Babylon on DVD.

Set in London in 1980, Babylon revolves around mechanic and part-time sound system toaster Blue (Brinsley Forde) and his Ital Lion crew, lined up for a sound clash competition with rival outfit Jah Shaka. But as the event approaches, Blue’s life begins to unravel – he’s fired from his job by a racist boss, then he begins to suspect his girlfriend is cheating on him. He’s also chased and beaten by a group of plain clothes police and has his sound equipment destroyed at his lock-up garage. There’s only one way to respond – fighting fire with fire.

The movie’s top notch reggae score has been remastered, as has the video itself, with commentaries, interviews etc also added. You’ll get a chance to see it at a special screening of the newly restored film at the National Film Theatre on 11th September 2008 or you can buy it via Icon Entertainment from 13th October 2008. Check out the original trailer below.