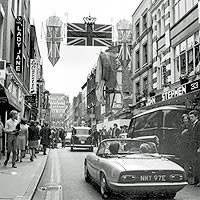 Radio 2 has a nasty habit of doing some damn fine documentaries, so I’m expect good things from Carnaby Street And All That, even if it is hosted by Lulu. It’s essentially a look at fashions of the era – or as near as you can get on the radio:

"When pop music and fashion went hand in hand, when a pop group’s stage gear would reflect that fashion and when the album covers reinforced their image."

There is an extract from an interview with the man who helped to run the Apple boutique as part of a collective called "The Fool", Dutch designer Simon Posthuma, and archive contributions from Bill "Vince" Green, John Stephen and John Lennon.