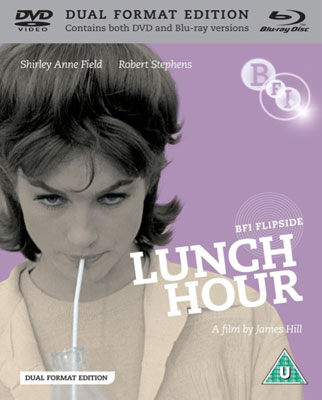 Based on a John Mortimer play, Lunch Hour, from 1962, stars Shirley Anne Field (Saturday Night and Sunday Morning) as a young designer on the brink of an affair with a married male executive (Robert Stephens) at the company where she works. This story of an illicit lunch-hour rendezvous is shot in 'real-time' and is described as a 'stylish and highly-charged story of subterfuge, simmering tensions and sexual conflict'.

Lots of extras too, those being:

Skyhook (James Hill, 1958, 17 mins): the adventure of oil exploration, deep in the tropics of Papua New Guinea
Giuseppina (James Hill, 1959, 32 mins): Oscar-winning short in which a young girl watches the quirky characters who pass by her father’s petrol station over the course of a summer’s day
The Home-Made Car (1963, 28 mins): a man restores his dilapidated Bullnose Morris, under the watchful eye of a curious young neighbour

All the films are presented in both high and standard definition, with an illustrated booklet with essays by Sue Harper, James Piers Taylor and Rob Harries. Available from 25th April 2011, you can pre-order now for a heavily-discounted £11.99.

Find out more about the release at the Amazon website