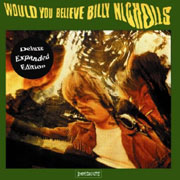 One of the great lost albums of the 1960s was Billy Nicholls’ Would You Believe, made by Mr Nicholls, assisted by label owner Andrew Loog Oldham and the Small Faces. Described by one critic as "…the British answer to Pet Sounds", the album was a great combination of OTT 60s production and top notch songwriting – and Nicholls was just 18 when the album was completed.

However, due to an alleged overspend on its grand production, coupled with the financial problems the Immediate label was already having, it never got a full release – the few copies that sneaked out changing hands for four figure sums.

It did get a nice CD reissue a few years back, but Sanctuary has obviosly been digging the vaults and found a few extras, meaning another reissue, this time as a 2 CD collection, the second disc a selection of demos and outtakes.

The new version is out on 26th June and we’ll have a review online before then. But if you’re a fan of 60s beat, and especially the Small Faces, it’s looking like an essential purchase.