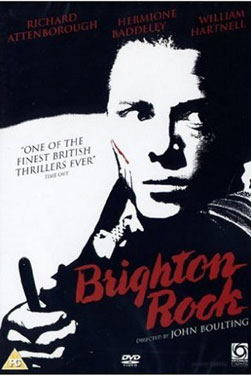 It's a classic post-wat thriller from the pen of Graham Greene (which originally dates from 1939), but the new movie version of Brighton Rock is apparently set in 1964, amid the backdrop of the mods and rockers beach fights. Which probably means there'll be some extras work kicking about in a couple of months.

The new movie version stars Helen Mirren and Pete Postlethwaite, alongside Sam Riley (who played Ian Curtis in Control), who will take the central role of Pinkie Brown, and Andrea Riseborough, who will play Rose Brown, with direction by Rowan Joffe. Location shooting is obviously London and Brighton.

Whether it is the 'truly great British gangster film' promised is anyone's guess, but it might be a tasty little movie with a decent soundtrack if done well. You'll have to wait until 2010 to find out if it is worthy of the hype. In the meantime, Amazon is doing the original DVD for under a fiver if you want a refresher. You can find it here.