Buddy Miles, the American drummer who played with Jimi Hendrix in his Band of Gypsys, has died at the age of 60 at his home in Austin, Texas of congestive heart failure. 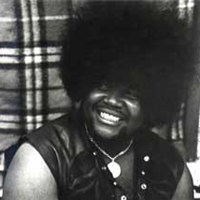 Born in Omaha, Nebraska in 1947, Miles was performing in his father’s jazz combo by the age 11. Within a few years he was an in-demand session player for top r’n’b groups. He earned his dues playing with the likes of the The Ink Spots, Ruby and the Romantics, Wilson Pickett, and The Delfonics. Then in 1967 Miles joined forces with guitarist Mike Bloomfield to form rock and soul outfit Electric Flag. Later he teamed up with Hendrix and bass player Billy Cox in the short-lived Band Of Gypsys following his work on Jimi’s Electric Ladyland double-LP. The Band of Gypsys made just one album, a live set recorded on New Year’s Eve in 1969-70, and two of Miles’ songs, Them Changes and We Got to Live Together, were included on the album. In later years Miles played with the likes of David Bowie, Muddy Waters, Barry White, Carlos Santana and Stevie Wonder.

A statement on his official site www.buddymiles.com said that a tribute
show will be announced shortly that is open to all to attend.