Now here is an album with a stellar line-up of 60s legends that almost never came out. 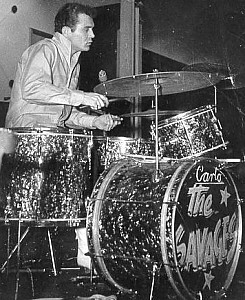 Carlo Little was a ’60s drumming legend. He played with The Savages, Cyril Davies All Stars, The Rolling Stones and The Hoochie Coochie Men amongst many other favourites of the beat era. In 2000 Little recorded an album with some of his old 60s contemporaries. However shortly afterward he fell ill and eventually died in 2005. The album languished unheard for many years, but next month is finally released.

The album is released on January 12th, and is available to order from Amazon here. A launch party for the album takes place at the Eel Pie Club in London on March 4th.

The official Carlo Little website can be visited here.