The legendary blues label Chess Records were responsible for some of the best blues and rock’n’roll records of last century. Established by brothers Leonard and Phil Chess in Chicago in 1949, artists that appeared on their releases included John Lee Hooker, Elmore James, Bo Diddley, Jimmy Reed, Muddy Waters, and Etta James. And now the story of Chess Records is to be turned into a Hollywood movie. 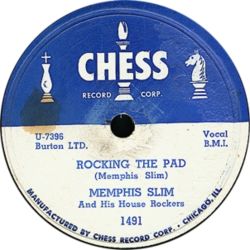 The picture, entitled Cadillac Records (a reference to when the Chess brothers would
sell records from the trunk of their car) will see Beyoncé once again on the big screen (following her appearance in Dreamgirls), this time playing Etta James! Also signed up for the film is Adrien Brody will play the role of Leonard Chess, and Jeffrey Wright will star as the one and only Muddy Waters.

The film, produced by Sony BMG Film, begins shooting
in March in New Jersey and Mississippi (although why it isn’t being shot in Chicago is baffling), with an expected released date of early next year. So plenty of time to get excited and once again listen to those old records in anticipation. May we recommend you start with Etta James, and perhaps some Chuck Berry too.