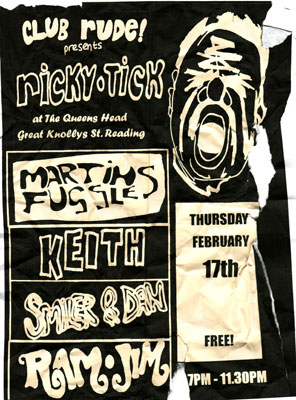 If you're in the area, the Club Rude! Ricky Tick special is certainly worth checking out.

If you hadn't guessed, it's a tribute to the legendary Ricky Tick club in Windsor. Not only that, Martin Fuggles, the original Ricky Tick DJ, will play a set all off his original 45s. He will play 'a classic Ricky Tick set' that he spun when he DJ'd for the likes of Little Stevie Wonder, Geno, The Who, Prince Buster and many others. Martin has apparently not DJ'd since 1967 after he was asked to DJ for The Pink Floyd and uttered '…if that's the future of music I'm giving up!' Which he promptly did. Expect lots of Stax, Atlantic and Motown straight out of his box for the first time in 44 years.

It takes place at the Queens Head, Great Knolly Street, reading in Thursday February 17th from 7pm nil 11:30pm. Entry is free. For more details, gets in touch with Smiler at [email protected].