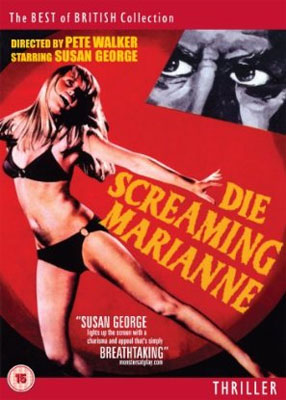 Coming out in the next week or so is another Pete Walker reissue – Die Screaming Marianne.

Set at the tail end of the 'swinging' sixties, it stars Susan George, Barry Evans and Judy Huxtable, the first of those being the Marianne in question. She's been left a large sum of money and some dirt on her father, a corrupt judge, but that father and her evil sister (Huxtable) want her dead and indeed, want her money.

Odeon has reissued the DVD with an added commentary from the director and a newly-filmed interview. Our review is online now, check it out if it's your kind of thing.