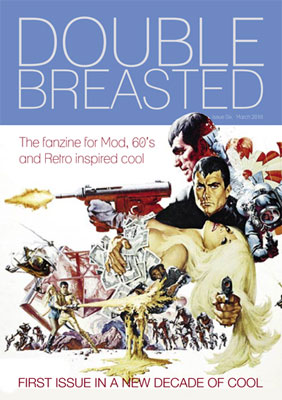 For some people, starting new Facebook groups every 10 minutes seems to appeal, but luckily for us, the folks north of the border make more of an effort, producing the Double Breasted fanzine. Oh yes, the new issue is out on March 1st 2010.

This particular issue features interviews with Acid Jazz's Rich Searle, Alex Petty from band of the moment Aunt Nelly, Jewel Records Stan Lewis and even me on behalf of Modculture. But don't let that put you off. There's also photo's from the launch of the book, I'm Not Like Everybody Else and an interesting look at the music which inspired The Beatles, plus loads of album and single reviews, scoot news, clothing, books and much more.

Four issues are planned for this year – 1st March, 1st June, 1st September and 1st December. You can get all the copies for £9 – UK, £12 – Europe and £15  – Rest of the World. Subscribers may also get a goody or two during the year. For more details ro to buy the fanzine via email, use the [email protected] email address. Otherwise, find out more at the MySpace site.