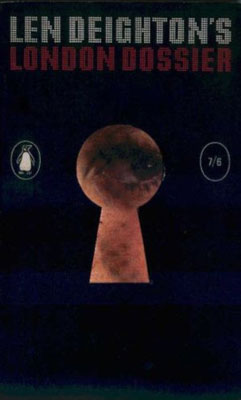 If you've not picked up a copy of Len Deighton's London Dossier, there are a couple of cheap copies on eBay right now – but both differ significantly.

This alternative guide to London in the 1960s is famous for its cover – with the original paperback from 1967 sporting a keyhole design that hides an image of Twiggy behind. Over the years, these have become damaged, so are now quite rare.

There's an original paperback with the keyhole intact on eBay right now, described as 'like new', it's still at its £2.75 starting bid. Well worth keeping an eye on. You can find all the details here.

But more rare than that is the hardback version of the book. In fact, it's hardly ever seen. A first edition hardback is also on eBay right now, described as a 'very good, very clean and sound copy'. A few bids on it right now, but the price is still at a modest £5.75.

London Dossier in hardback on eBay