Having released two rhythm’n’blues enthused albums with his backing band The Joneses, Edgar Jones has recorded a new album, The Masked Marauder, billed as Edgar Jones and Friends. 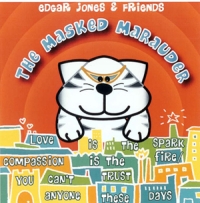 Containing all the hallmarks of his previous records, this new album sees the influences of electronic music to produce a freaked-out, soulful voodoo groove. This new venture is essentially a two man affair: Jones alongside a good friend/next-door neighbour, a mysterious character who we’re told ‘suffers from  agoraphobia’. As the album took shape friends would drop in to record different parts for certain songs. It has worked to good effect too, for according to Jones’ label the new album has nominated for the Mercury Music Prize (although the nominations have still to be officially announced – perhaps this is a ‘Modculture exclusive’ for you!).

The Masked Marauder is released by Viper Records on March 17th. You can order it from here. In the meantime Edgar Jones And The Joneses play The Jazz Cafe in London on Sunday February 24th. Tickets are on sale now at www.jazzcafe.co.uk, www.meanfiddler.com and www.seetickets.com. Or you can call 0870 060 3777.