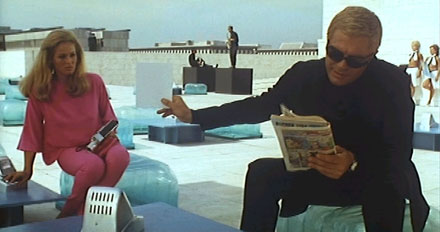 Returning for a second year is the Fashion In Film Festival, mixing talks, exhibitions, newly-commissioned film works, but best of all, some rarely-seen cinema classics that show how fashion of the day was just as important as a good plot and scenery.

Some superb films on show this year too, with highlights (for me) including the visually stunning (see image above) 10th Victim (La Decima Vittima) from 1965 and Get Carter (1970) at the ICA, Mario Bava’s Blood and Black Lace (1964) at the Horse Hospital, as well as a double bill of delinquency curated by fashion designer and former mod Roger K. Burton (The Violent Years from 1956 and The Boys from ’62), Dario Argento’s The Bird With Crystal Plumage (1970) at the BFI plus Plein Soleil (1960) and Fata Morgana (1965) Ciné lumiére.

Much more besides, including some rare silent flicks and classic US film noir. Check out the full programme at the website – the event runs from 10th – 31st May 2008.