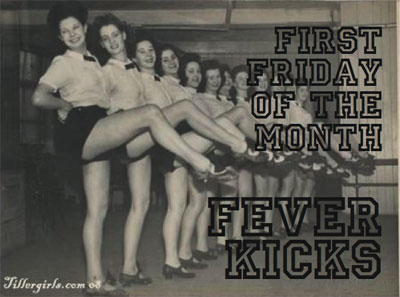 There's a few popcorn-themed nights and events around the country, but from Friday 5th November, Fever Kicks launches, claiming to be the 'first regular Popcorn night in the UK'.

It runs from 9am to 2am and it's free entry. Want to know what popcorn is? The organisers have very kindly written up a brief description, which you can read over the page. More on the club by calling Izzy on 07737 066148.

The Popcorn scene came out of the Belgian clubs of at the end of the ‘60s and coalesced into a fully fledged music sub-culture in the early ‘70s.

The name comes from the Dancing The Popcorn venue in Vrasene, near St Niklaas in Belgium. The focus is on non-mainstream tunes, mostly American, and not the more obvious, well-known hits. Early Popcorn is a mixture of doowop, r’n’b, latin, boogaloo, Italian crooners, deep soul and with some ska thrown in for good measure. The binding element of all these different styles is the mid-tempo rhythm.

When played right the atmosphere created is palpable with the deejays interweaving the different styles to create a continuous flow for the dancers. The style of dancing is based on the jive, like rock’n’roll dancing, but more elegant and less acrobatic. Certain Popcorn deejays are famous for having discovered records that have since become classics, just like in the northern soul scene. The most famous are Freddy Cousaert, Theo Dumoulin, DJ Lucien, Jeff Callebaut and DJ Ferre.

There has been a crossover in recent years with the UK’s northern soul scene, which has seen the tempo of tunes slow down to a more Popcorn speed. Two examples of big crossover sounds are ‘I’d Think It Over’ by Sam Fletcher and ‘Try My Love’ by Troy Dodds. Both records currently command huge price tags. ‘Try My Love’ was recently sold for $9,350 to a Belgian collector.