Members of the infamous ‘Forever 27 Club’, that small cache of musicians who died aged 27, are to be remembered in a new photography exhibition. 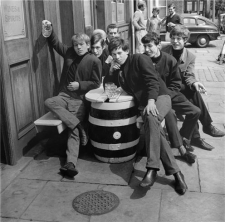 Brian Jones, Jimi Hendrix, Janis Joplin, and Jim Morrison will all prominently feature in Forever 27, which opens later this month at Proud Gallery in Camden. The gallery has gathered together over 60 photographs of these musicians (also featuring Kurt Cobain), and will include Philip Townsend‘s first photoshoot of the Rolling Stones in all their unrefined splendor from 1963, and also the last pictures of Brian Jones before he died.