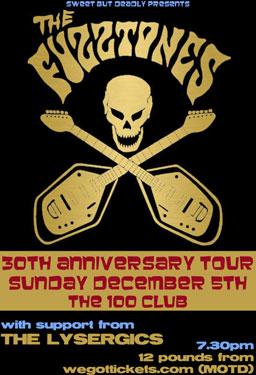 If 60s-inspired garage is your game, you might want to get yourself down to the 100 Club in London on Sunday December 5th 2010 – that's the date of The Fuzztones only UK appearance.

It's part of a 30th anniversary tour of 40 shows (but only this one in the UK) as well as promotion for the band's new Preaching To The Perverted album on Stag-O-Lee. Support is from London's The Lysergics and DJs. Plus fine garage DJing from Phil Istine & Andy Roseaman.