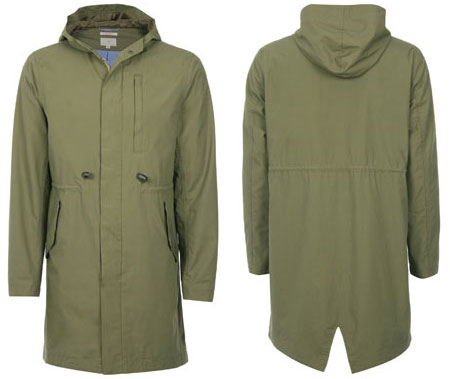 Flipping through Esquire last week, I noticed a piece on Gant, essentially saying that the company has gone for a classic/preppy look in tune with its roots for the new season. So, armed with my scepticism, I headed over there and amongst the mass of rugby tops and bad shorts, I did notice a decent Harrington, a similar windcheater and a couple of madras shirts worthy of a closer inspection. But I also noticed this Gant parka.

From the company's 'Rugger' range (nasty name), it's a stylised take on the classic military parka, in olive green, made of cotton, with a 'fishtail-like' back and a drawstring waist.

Not cheap at £199 – but still considerably cheaper than Pretty Green's selection and smarter than a miliary cast-off. If that's not your thing, check out the site anyway for those other items I mentioned earlier.