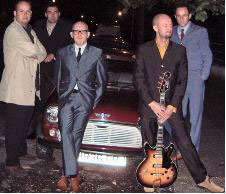 The Gene Drayton Unit are back on London’s live circuit,  supported by Orgestra Koolberg at the 100 Club, 100 Oxford Street, London W1

The Koolbergs will play a short set around 9pm to showcase the new ‘Vesparation’ / ‘A Man Alone’ single, which will be followed at 9.45 by the Draytons performing the new ‘Done ‘n’ Dusted’ album in its entirety in track order. After a short break in which Tim the Mod will be spinning appropriate classics, GDU will return with a second set made up entirely of old favourites.