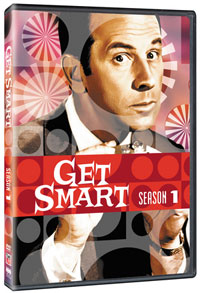 Long before Austin Powers there was Get Smart – and the original TV series is finally getting a DVD release in the UK. Probably to capitalise on the publicity from the movie remake.

Series one gets the DVD treatment, with Maxwell Smart aka Agent 86 (Don Adams) back to spoof 60s spy movies (and TV shows) and battle an assortment of super villains, including KAOS, The Claw, Siegfried, Harry Hoo, Mr Big and Hymie The Killer Robot, all courtesy of the pen of Mel Brooks.

It’s available from 7th July 2008, with all 30 episodes digitally restored and re-mastered, with extras including various featurettes, commentaries and vintage promotional clips. Expect to pay around £34.99.

Find out more about the DVD at Amazon.co.uk