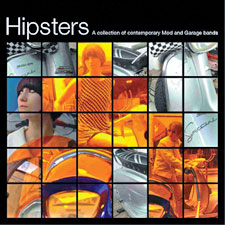 Acid Jazz has been putting out some decent music of late – and this forthcoming collection of new Mod sounds looks up there too.

The collection is titled Hipsters – A Collection of Contemporary Mod and Garage Bands, with a tracklist that covers most areas – Hammond, funk, garage, 60s-inspired beat and powerpop. For a full breakdown of who is on and a bit about each band (taken from the AJ press sheet), click the link to continue reading.

The album doesn’t seem to have a definite release date as yet. Hopefully we’ll have a full review online before it does hit the shops.

From Austin, Texas and are named after the street where the world famous Stax Studios were situated.

From Jersey City, U.S.A., The Black Hollies play in a 60’s style very reminiscent of the Yardbirds and The Pretty Things.

The Len Price 3 – The Last Hotel

From the Medway Delta. New kids on the block, The Len Price 3 fuse driving energy, catchy hooks and a raw 60’s garage sound.

Thee Shams – Not Gonna Make It

A mighty fine rocking band from Cincinnati, Ohio, U.S.A. Thee Shams are one of the most hard working bands on the circuit and are constantly on tour in the U.S and Canada.

The Gonks – Just A Man

The first of our European guests on this album come from Antwerp, Belgium and play Hammond fuelled, blue eyed beat. Just A Man is another 60’s styled goodie which will move people onto their feet.

Worldwide ambassadors of Neiderbeat, The Waistcoats come from Groningen in the north of Holland.

The Loons – Some Kind of Asylum

The Loons create a distinctive sound combining the hard kinetic drive of European Freakbeat, with the psychotic melodic cool of L.A’s Sunset Strip circa 1966. Some Kind of Asylum is taken from the album Paraphernalia on Ugly Things Records. Ugly Things is also the name of singer Mike Stax’s superb 60’ music magazine.

This excellent French combo mix 60’s garage beat with Boogaloo. If this combination doesn’t make your party a swinging affair you’re either deaf or dead.

The Moving Sounds – The Blindfold

From Stockholm, Sweden. Formed in 2000 The Moving Sounds play music inspired by the 60’s with a mod flavour.

The Risk – Something On My Mind

The New Mastersounds – Coming Up Roses

The mojo beat of this fantastic track will bring a smile to the faces of their very large Mod following. A sure fire, cool, driving instrumental dance floor packer.