The Impressions are to headline the In Crowd Soul Weekender in Northampton this May Spring Bank Holiday. 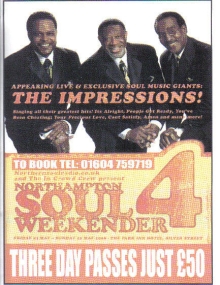 The Saturday night event featuring The Impressions will be broadcast live on BBC Radio 2, and that days’ Craig Charles Soul & Funk show will also broadcast live from the event.

Weekend passes cost £50, but be quick as not many are left. To buy tickets and to see more about the event visit the Northern Soul Radio website here.