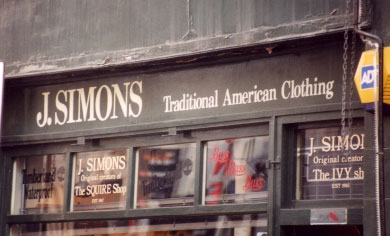 It was rumoured to be closing as far back as early 2008, but now it's been confirmed that J. Simons will be closing down in February 2010, just one year short of its 30th anniversary in its current location.

Arguably one of the most important men's retailers in the UK (at least, from a classic mod/Ivy League perspective) and dating back to 1965 (if you include The Ivy Shop in Richmond), J. Simons' will be clearing out its stock from December in a sale that's likely to last until the doors shut in February next year.

According to the website (which you can't order from), there's an 'abundance of good things to be found including some great one-offs from Grenfell, Made in England. There are also of course some pieces from the John Simons Apparel Company'. All the Harrington Jackets are now £99 too if you're after one of those. Sad to see it go, but you never know, someone might just take on the name and brand, keeping it alive for some years to come. Here's hoping that's the case.