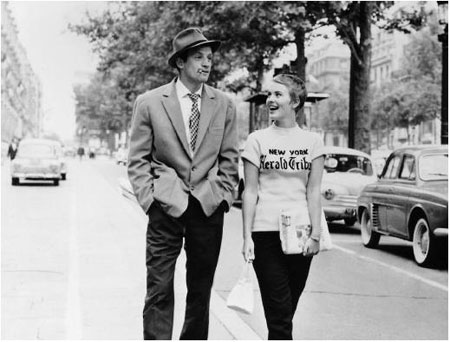 The Barbican has announced details of its forthcoming seasons, which includes The Directorspective: Jean-Luc Godard from Friday 16th to Tuesday 20th July.

The Nouvelle Vague pioneer was hugely influential on many that followed, with the season focusing on those (relatively) early movies that made such an impact.

Want the details? See over the page. Tickets can be booked now at the Barbican website.

Friday 16th July
6.30pm – Alphaville (PG) (France/Italy 1965 Dir. Jean-Luc Godard 98 min)
Godard ventured into science-fiction with Alphaville, the story of world-weary detective Lemmy Caution, who arrives in the dehumanized city of Alphaville where the inhabitants are ruled by a computer and love and emotion are outlawed. The futuristic architecture of the city is vividly captured by the glistening cinematography of Raoul Coutard, crowned by exquisite performances by Anna Karina and Eddie Constantine.
In French with English subtitles.

Sunday 18th July
2.00pm – Breathless (À bout de souffle) (PG) (France 1960 Dir. Jean-Luc Godard 89 min)
Godard’s defining debut as a director follows the Bogart-obsessed hoodlum Michel (Jean-Paul Belmondo), on the run after killing a policeman, as he tracks down his old flame Patricia (Jean Seberg). Shot on location in Paris on hand-held camera, Breathless evokes the city at its most romantic.
In French with English subtitles.

Monday 19th July
6.30pm – Contempt (Le mépris) (15) (France/Italy 1963 Dir. Jean-Luc Godard 103 min)
Based on the novel by Alberto Moravia, Jean-Luc Godard’s masterpiece Contempt is set on Capri and tells the story of Camille (Brigitte Bardot) who falls out of love with her screenwriter husband (Michel Piccoli) who is working on a commercial adaptation of Homer's Odyssey for a vulgar American producer. Godard explores themes of art versus commerce, idealism versus pragmatism, and the position of the filmmaker in the commercial cinema world. Also starring Jack Palance and director Fritz Lang.
In French with English subtitles.
Contempt complements The Surreal House exhibition in Barbican Art Gallery (2).

Tuesday 20th July
6.15pm – Pierrot le fou (15) (France/Italy 1965 Dir. Jean-Luc Godard 110 min)
Godard called Pierrot le fou the story of the ‘last romantic couple’, but it was also his spectacular farewell to the style and spirit of the Nouvelle Vague. On impulse, Ferdinand (Jean-Paul Belmondo) abandons wife and child to take off with Marianne (Anna Karina), an old flame, on a crazy adventure involving fast cars, mysterious gangsters and a Mediterranean idyll that turns sour.
In French with English subtitles.