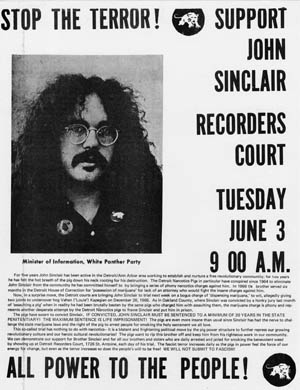 67 year-old Sinclair performs his unique poetry backed up by slide guitarist Gary Lammin on Wednesday April 15th, after which there will be a question and answer session. And Sinclair is a man worth asking questions to: his work as a supporter of the arts coupled with his radical political activism have made him famous and, some would say, infamous. Following Sinclair's imprisonment in 1969 John Lennon was moved enough to release a song “John Sinclair” on his Some Time in New York City album in 1972.
Last year Sinclair became editor-in-chief on the anthology series Headpress for the UK independent publishing house of the same name. More recently he performed in America in honor of President Obama.
The event will start at 8pm and entry is free. Visit the Filthy's website here.