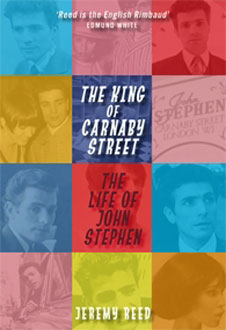 It's down as a new release, although I'm sure I've seen The King of Carnaby Street: A Life of John Stephen by Jeremy Reed previously. So maybe this hardback book is a reissue when it lands at the start of June.

As you might have guessed, this is a biography of the iconic fashion maker and seller, from his early efforts in the mid-50s at 5 Carnaby Street to three shops on that very street, a cult reputation and celebrity clientele on the hunt for gloves and hipsters in the latest colours, not to mention giraffe-necked tab-collar shirts. On the flipside, it also covers the man's personal life too, forced to hide his homosexuality and suffering from bouts of manic depression.

If you're a fan of the era and fashion, one to look out for. Talking of which, look out for our review (hopefully) before the release date of June 1st 2010. The new version isn't listed for sale as yet, but there is more information on the Haus Publishing website.