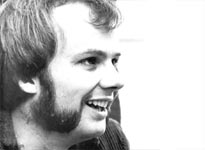 Radio Caroline is/was the most the well-known pirate radio station, but it wasn’t the most popular – that was Radio London. John Peel started work on the station in early 1967, taking on the late night show. The station was mainly top 40, but Peel realised his bosses weren’t paying much attention to the tunes played late at night, so he created The Perfumed Garden – two hours to the best of the new music to emerge from America and the UK, some vintage blues, some current pop hits and whatever else caught his eye (or ear).

If you want an idea of what it sounded like, check out 6 music this week – as it’s replaying The Perfumed Garden.

Probably not that radical now, but at the time, it was the soundtrack to the counter culture of the era. It didn’t last long, with legislation outlawing the pirates within a matter of months. His last show on 14th August 1967 carried on beyond its usual 2am finish, going through the night until 5:30am. This final show is the one being broadcast by 6music over the week. Well worth a listen – and if you’re out of the UK, it will be available online on ‘listen again’.