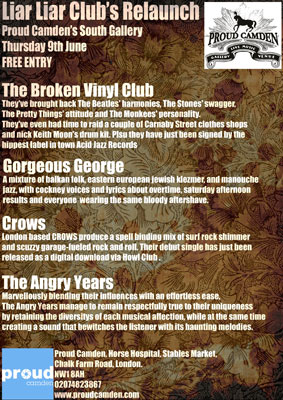 We have featured the night before, but the Liar Liar Club has a new venue and as such, a relaunch too.

Doors are open at 7pm, with the opening night (Thursday 9th June) offering up the The Broken Vinyl Club, a band we rate and who we featured a short while back. A band who will do big things in the coming 12 months, so get in early (and for free).

Also on the bill are Gorgeous George, as well as Crows ('mix of surf rock shimmer and scuzzy garage-fuelled rock and roll') and The Angry Years.

Get in touch via email [email protected] if you want to know more.