The Love documentary Love Story is at last coming to DVD in the UK. 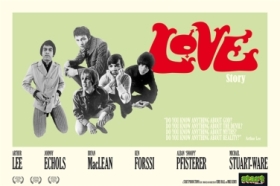 The film was premiered on both sides of the Atlantic last year but is not to be on general release in cinemas. Instead it will be available on DVD in June. Check the usual retail outlets closer to the time for price details. In the meantime unedited parts of some of the film interviews are available to watch on the Love Story Myspace page here.