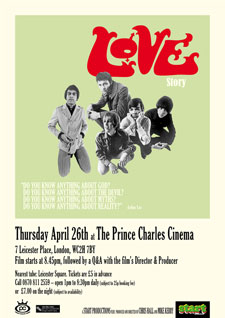 Love Story – the documentary film of the legendary Los Angeles band Love – is doing a tour of independent cinemas, kicking off with a showing in London.

Love Story covers the band from the beginning through to their disintegration in 1968 following the completion of the band’s masterpiece Forever Changes. Filmed in 2005 & 2006, it features the last ever interviews with band leader Arthur Lee, plus interviews with all surviving original band members – Johnny Echols, Michael Stuart, Alban ‘Snoopy’ Pfisterer and unseen footage of the late Bryan Maclean.

For full details of the screenings, read on after the turn. And if you want to know more about the film, visit the MySpace site.