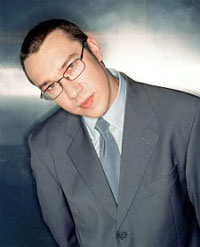 I once emailed Mark Lamarr, in an attempt to book him for a club night I was doing in Manchester. He couldn’t do it, but did actually call me up to apologise for not being able to do it, which makes him a better person than most in my book.

Another reason for giving him the time of day is Mark Lamarr’s Alternative Sixties – easily one of the best radio shows around right now. The show’s a mix of across the board underground 60s sounds – and that’s why it works – because it doesn’t try too hard to fit a particular genre. If it’s a decent track from the era, it’s got a chance of a spin.

The new series is now on every Monday, from 9:30pm until 10:30pm, on Radio 2. If you’re not around then or not in the UK, you can listen to each week’s show again online at the show’s homepage.

– the page also has tracklistings from the week and the week’s competition.