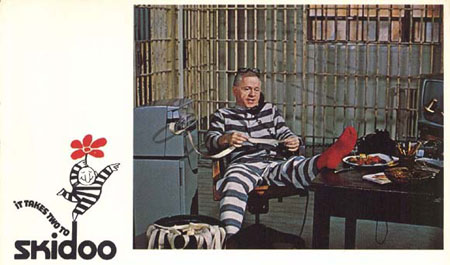 If you are in London and on the look out for a late night cult film in themed surroundings, free beer and a party thrown in, you should check out Midnight Movies, which is taking place at Curzon Cinemas.

The next event is on Friday 30th May, a 1960s-themed event with Skidoo on the big screen – a satirical comedy involving gangers, hippies, prison riots, LSD, a soundtrack by Harry Nilsson and starring Groucho Marx in his final role. Locked away by director Otto Preminger himself and never released on video and DVD, this is a rare opportunity to catch this groovy flick from 1968.

The event starts at 9:30pm (with DJs), with the film showing at 11:30pm. Entry is £10 (advance) or £12 on the door, with each ticket including a free beer. Tickets are available from the box office at Curzon Soho, 99 Shaftesbury Avenue, W1D 5DY or from the website below.