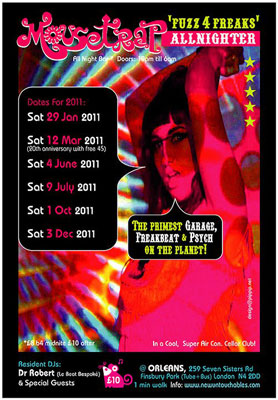 It was once an all-in-one soul and beat night, but in recent years, Mousetrap has split its nights between soul/R&B and garage/psych on a monthly basis. Anyway, in whatever form it has taken place, the Mousetrap allnighter is 20 years old – and the first anniversary event is the 20th anniversary Fuzz 4 Freaks allnighter.

As it's an anniversary night, there's a free vinyl 45 – you'll find out what on the night of Saturday 12th March at Orleans, 259 Seven Sisters Road, Finsbury Park, London, N4 2DD. Get there before 11:30 and you'll get a free drink and a full night of beat, garage and psych from Robert, Speed, Spider Webb (The Horrors) & Carolina!, plus kaleidoscopic visuals. If soul is more your thing,

2nd April is the 20th anniversary of that – details to follow.