Wolverhampton: riding high in the Championship, and now also in the 60s-influenced music stakes with the introduction of Jensen And The Interceptors. 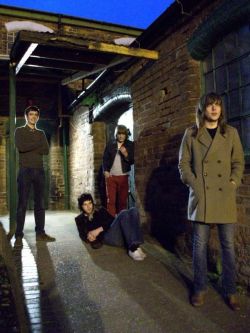 The four-piece consist of Izzy Izenstain (Vocals/Guitar), Joey Ropper (Guitar/Vocals), James Campbell (Bass), and Andy Bowker (Drums/Vocals). Melting together the holy trinity of freakbeat, British Invasion pop and gritty garage rock, Jensen And The Interceptors formed only a few months ago but already have their songwriting skills sorted. The propulsive, ‘Hey Joe’-aping ‘There’s A Girl’ has the garage-jangle and snotty vocals we all have come to love, the demo of ‘Just To Cry’ is pure primitive Thee Headcoatees-esque joy, whilst ‘Sitting Side by Side’ is one-part cheese-grating guitars and one-part ‘bop sha woo wop’ vocals. These Interceptors are surely the offspring of the Black Lips generation, and doing it just as well as the masters.

Have a listen to Jensen And The Interceptors yourself by visiting their Myspace page here. They are not hanging around on the gigging front, so whether you live in the Midlands, the North or the South you should be able to catch them soon. With full marks on the looks and the attitude front we wouldn’t be surprised if they are huge before 2009 is done.