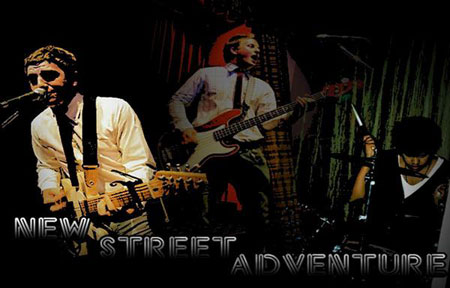 What is a mod band in 2009? We get sent links to MySpace pages from everyone from old school powerpop, 60s-style recreations, soul/funk combos and everything in-between. The truth is that the term 'mod band' is either irrelevant or all encompassing, depending on your point of view. New Street Adventure claim to be part of the 'new mod revival'. Are they? I'll leave that one for you work out.

In some ways they are – check out Be Somebody on their MySpace page and you'll find a catchy tune with a driving northern-style beat, very much 'today', but at the same time, offering up a heavy nod to the past. Dig deeper and you'll find some spikey Arctic Monkeys-style indie grooves, not bad, but not obviously 'mod' either. Saying that, a good band is a good band and on the face of it, New Street Adventure certainly have potential.

Indeed, they've already been picked up by Ben Sherman as their 'official unsigned act' and will be appearing on the next Rowed Out Records compilation, so it looks like they're already getting the right attention. See what you think via the MySpace link.