Bands often come together after former disparate musical journeys end, and the impetus to start afresh brings like-minded souls instinctively together. Such as it was with London four-piece beat-folk-psych’ers The See See. 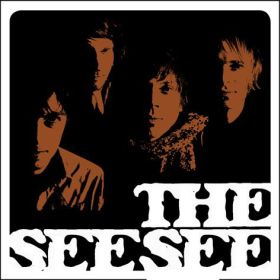 Richard Olson (The Eighteenth Day Of May), Kevin Peyok (Waxwings), and Ben Swank (Soledad Brothers) are joined by Leeds folkster Pete Greenwood. Together they bring ‘guts’ to the traditional 60s rock-lite sound. Sold-out debut single ‘Up The Hill’ takes the West Coast jangle template and brings that sought-after ragged, world-take-a-hike angle on events. Another track ‘Keep Your Head’ sounds like ‘Eight Miles High’ on a particularly frazzled night out. Meanwhile the tremeloed guitar and on the beginning of new song ‘It’s True Pt. 12’ shows the influence of various lilting luminaries (The Pretty Things, Buffalo Springfield, Teenage Fanclub), before briefly heading into more lysergic territory with some heady and heady psychedelic guitar lines.

Jack White is a big fan of the band, and has asked them to provide support at recent Raconteurs gigs. This comes second in the highlights-so-far category though. As Olsen explains, “Kevin ranted outrageously from the stage at a bunch of yuppies at one of our early shows; their jaws dropped down to their brogues and they all bought our records afterwards“. That display of honestly and integrity implies The See See are a band that you can easily learn to love, and men not reduced to conform and flogged on the back of the latest nostalgia trend. Free from the weight of anyone’s expectations and the ability to record at their leisure in Olsen’s warehouse studio has brought freedom and confidence to the grouping. “We’re probably the least self-conscious band in London, and it pays dividends. You can listen to the band growing. It’s like watching a kid learn to walk“. And when your children sound as handsome as this, you’re likely to beam with pride.

The See See are currently working on their debut album to be released next year. Hear them on their Myspace page here.