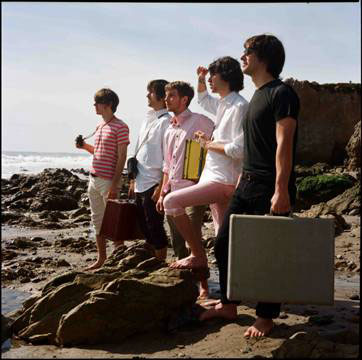 A new-ish band, formed early in 2010 by former members of Las Vegas band Panic! at the Disco – The Young Veins.

For this new venture, Ryan Ross and Jon Walker of said band, along with bassist Andy Soukal, drummer Nick Murray and keyboardist Nick White have used the 60s as their template – a mix of beat, psych and surf providing the foundations for the band's debut album, Take A Vacation!, which is available now in the UK and of course, in the US via One Haven Music. Occasionally it might get a bit Beatles-esque, but in general, if you love that era, you might well love this too.

You can check out some tunes on the bands's MySpace page or you can check over the page for the video of the bnad's debut single, Change. Is there a new paisley underground incoming? I hope so.