1 shares
Note that I independently write and research everything in this article. But it may contain affiliate links. 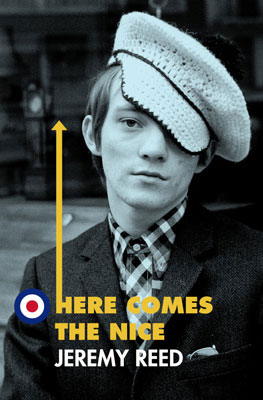 Now this is a weird one. Remember the recent King of Carnaby Street John Stephen biography? Well, Jeremy Reed, the man behind that, has written a spin-off book called Here Comes The Nice.

The weird bit? Well, the book, published by Chomu Press, sounds like some kind of mod sci-fi. I kid you not. In fact, I'll repeat the description from the publisher's own page:

‘Wanna take time out?’ the Face suggested non-committally, as though he was really speaking to someone over the boy’s bony shoulder.

‘You’re joshed up delish,’ the boy replied. ‘Mother’s a stretcher case on the rack today. You dining out ajax?’

The Face came from out of nowhere – a self-regarding stylist like a rogue gene triggering the cultural acceleration of the sixties. The Stones had the notoriety, but the Face had the style. Cruising the Dilly or up on blues in Ham Yard, the Face was it. The Stones may keep rolling, but true Faces never die.

Almost fifty years later, in an apocalyptic London whose urban maze is menaced by emotionally damaged veterans of a morally bankrupt war, Paul is researching the enigmatic designer John Stephen, Mod icon and inimitable king of Carnaby Street. When Paul experiences a time-slip, the two time-lines – present and sixties – begin to twist around each other like a DNA double helix. What is Paul’s true relationship to the Face? Can the Face still be alive and unchanged in present day London? If the Face is real, does Paul’s deepest identity lie in the present life he knows, or the lost past he dreams of?

From Jeremy Reed, Here Comes the Nice is novel as time-machine, taking the reader back to the raw early gigs of the Rolling Stones, the Who, the Small Faces, and behind the scenes to a secret that will make the sixties live forever – somewhere. Elegiac and thrilling, Here Comes the Nice is a paean to the unacknowledged power of the obsessive imagination.

Interested? Well, you can pre-order a copy now. We'll hopefully have a review at some point, but if you want to buy blind, £8.25 is the price.