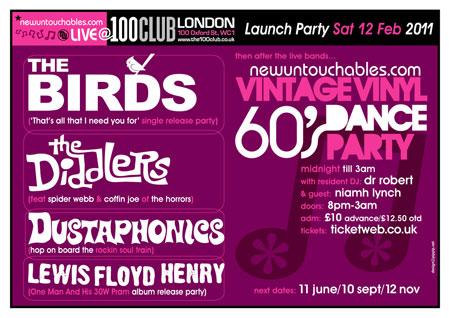 Looks like the financial problems are the 100 Club are now sorted (without resorting to some kind of hippy commune arranagement), so events are now being scheduled for the year. That includes the newly-launched New Untouchables Live at the 100 Club.

The 'live' but is the most important word there, with this being a showcase for live bands, throwing on some DJ club sounds until 3am. 12th February is the launch date, with what's left of British R&B band The Birds playing live (it's also the single release party for 'That's all that I need you for' featured in the film ‘The Deadly Bees’ and now finally available on a vinyl 45). They're joined by Horrors spin-off The Diddlers and one man blues sensation Lewis Floyd Henry with his new album 'One man and his 30 watt pram' being given a plug.