It seems to us here that a few new bands are forming around Europe recently who are executing a wild take on 1960s rhythm and blues. From London we have King Salami & The Cumberland Three, who recently released their first single on Butterfly Records. In King Salami they have a fantastic showman (who passion and knowledge of r’n’b is exemplary) and a frantic backing band, all of whom have worked in several hot rockin’ London combos over the past few years – and know how to put on a show. And indeed you can catch their live act most weekends somewhere in the capital and often beyond too. 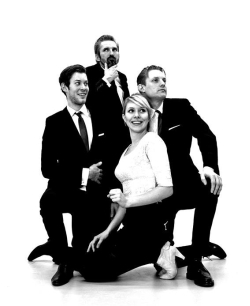 And following the recent coverage of The Branded, here is another dose of heavy r’n’b from Sweden in the shape of Stockholm’s The Vanjas. Mixing blues covers (e.g. ‘Shake’, ‘What I’d Say’) alongside their own material, they are ready to showcase their music all over Europe very soon. You wouldn’t want to miss them, for The Vanjas are sharply dressed, incendiary groovers.

Do keep us informed of other similarly styled bands forming out there; we maybe seeing the birth of a new scene!