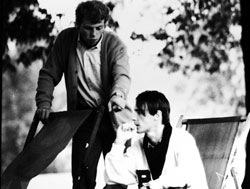 If you’re in Sheffield on Monday 30th October, you can catch the world premiere of a new documentary on the career of Paul Weller, under the title Into Tomorrow. The film also kicks off the Sheffield Doc/Fest – a season of past and present documentaries.

In the film, Weller apparently opens to director Stuart Watts about his life and career –  his upbringing in Woking, years in the Jam and Style Council, his relationship with his father-manager, his record company dropping him, his mid-life crisis and his resurgence, using archive and his own music as the soundtrack . There’s also contributions from a diverse range of people, including Boy George, Noel Gallagher, his family and his ex-wife.

No news on where else this might be showing, but I expect it will be on DVD for Christmas.

More on the Sheffield Doc/Fest