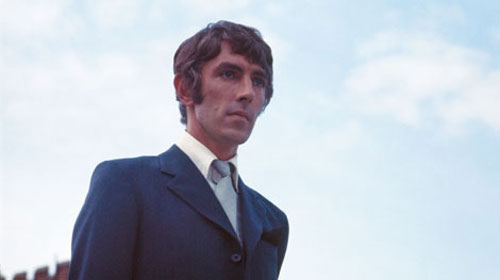 Not sure it’s been advertised all that much, but starting in March is a Peter Cook season at the BFI, featuring a couple of cracking movies.

Obviously, one of them is Bedazzled, which is showing twice. But there’s also an outing for the (even better) satire The Rise And Rise of Michael Rimmer, which you can read about here.

On top of that, there’s a selection of TV highlights showing on the big screen. The reason for all of this? Well, if he’d have lived, Peter Cook would have been 75 this year. Full details below…

Beyond the Fringe
BBC 1964. Dir Duncan Wood. (Extended version) 116min.
This famous stage show launched the careers of four of the generation’s brightest humorists, as Jonathan Miller, Alan Bennett, Dudley Moore and Peter Cook combined their skills to present a scintillating series of sketches, skits and satirical shenanigans. The show proved a huge hit on both sides of the Atlantic and brought the new comedy of the emerging Oxbridge generation to a wider world. It almost single-handedly kick-started the satire boom that was to dominate TV comedy for much of the 1960s. The BBC originally screened only a 60-minute version of this historic tele-recording.
Thu 8 March 18:10 NFT1

Not Only But Also
BBC 1965-1966, 1970. Compilation c100min
The Cook and Moore double-act reached its zenith in this brilliant TV sketch show that was a big success for the newly launched BBC2. The pair played perfectly off one another, often seeming to stray off-script or to incorporate ad-libs in an attempt to faze each other. Moore’s near corpsing, as Cook fixed him with a laser-like stare following some deftly delivered comic time bomb, became a much-loved feature of the show. We are delighted that this evening’s bespoke compilation will be introduced by one of the show’s original producers, Joe McGrath.
Mon 12 March 20:40 NFT3

Peter Cook and Co
ITV 1980. Dir Paul Smith. With Peter Cook, Rowan Atkinson, John Cleese, Terry Jones, Beryl Reid, Paula Wilcox. 55min The dream supporting cast for this one-off special illustrated the high esteem in which Cook was held by his peers. Although critics at the time thought it patchy (a term perennially applied to sketch shows), it can now be viewed as a wonderful snapshot of Cook at the time, with the sketch spoofing Road Dahl’s Tales of the Unexpected particularly memorable. Plus a full supporting programme of Cook TV appearances (total r/t c100min).
Fri 16 March 20:40 NFT3

Oddities and Rarities
Sketches, interviews, adverts, chat show appearances and comedy monologues from the master himself. Tonight’s specially compiled pot pourri will bring together fascinating fragments from all periods and areas of Peter Cook’s career. Be warned – this screening will include adult material definitely unsuitable for those of a tender disposition, since within the programme we will be reacquainting ourselves with the notorious Derek and Clive! Wed 21 March 18:20 NFT2

Bedazzled
UK 1967. Dir Stanley Donen. With Peter Cook, Dudley Moore, Eleanor Bron, Raquel Welch. 103min. 12A
Cook’s script crosses the Faust legend with the permissive society of the Swinging Sixties as hapless everyman Stanley Moon (Moore) falls under the spell of the Devil, in the guise of George Spiggott (Cook). Stanley is tempted to mortgage his soul to win Margaret (Bron), the girl of his dreams, but the Devil’s devious machinations constantly muddy the water. Great to see Cook and Moore on the big screen and they receive terrific support from the first lady of satire, Eleanor Bron.
Thu 1 March 20:40 NFT3 Sun 4 March 18:10 NFT3

The Rise and Rise of Michael Rimmer
UK 1970. Dir Kevin Billington. With Peter Cook, Denholm Elliott, Arthur Lowe, Harold Pinter, John Cleese, Graham Chapman, Ronnie Corbett. 102min. 15 A biting satire, underappreciated in its day, which has since gained cult status. The ruthless but charismatic Michael Rimmer (Cook) barnstorms his way through the world of advertising before setting his sights on higher office – running the country itself. Cleese and Chapman had the original idea, though the final screenplay also credits Cook and director Kevin Billington, and the result is a wild fantasy, with various comic vignettes linked by Rimmer’s irresistible charge to the top.
Sun 18 March 18:20 NFT2 Wed 21 March 20:40 NFT
Wed 21 March 20:40 NFT