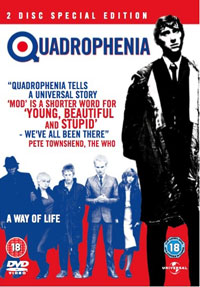 Good news for all you Quadrophenia fans – the poor quality UK DVD release is finally being replaced by a special edition two-disc version, which gets an official release on 7th August 2006 – though we’ll have copies to give away here at Modculture if you want one for free.

There’s no point going over the plot, you’ll know it’s Phil Daniels starring as Jimmy in the film version of The Who’s classic album about the 60s Mod scene. Whether it’s a good portrayal of the Mod scene past is open to question – but it’s certainly one of Britain’s finest youth movies.

We’ll have more on the DVD, a competition to win copies and a full review in the coming weeks. Sign up to the newsletter to keep informed.