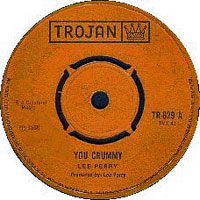 Film-maker, actor, musician (if you remember B.A.D.) and reggae fan Don Letts presents a two-part series under the title The Story Of Trojan Records, starting this Saturday, 24th June at 9pm.

In its heyday of the late 60s to the mid 70s, Trojan chalked up nearly 30 hit singles, released the legendary Tighten Up compilation series and effectively launched Jamaican acts in the UK such as Jimmy Cliff, John Holt, Ken Boothe, Bob & Marica and Dave & Ansel Collins. For an idea of their success, in 1970 alone Trojan released 500 singles, selling over 1.5 million records in the process.

The documentary tells not just the story of Trojan Records and the story of how Jamaican music arrived in the UK, kikcing off with Duke Reid’s Trojan soundsystem in Jamaica and looking at how the influx of young Jamaicans into post-war Britain kick-started the Jamaican music scene in the UK. It also looks at how British skinheads made ska and reggae popular in the British charts and how the music adapted to UK tastes to become chart hits. It also covers the fall of the label, before Two Tone gave it a new lease of life.

All sounds good. And if you miss it, you’ll be able to listen again at www.bbc.co.uk/radio2.