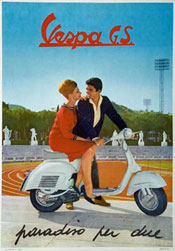 Opening on Saturday 13th May, Ready, Steady, Go! at Chelsea Space in London claims to be the first exhibition to explore the style, fashion, people and events associated with Italian designed scooters and their impact on British culture over the last 60 years.

Ready, Steady, Go! examines the history of Lambrettas and Vespas scooters in Britain. In the aftermath of the Second World War, the scooter changed people’s lives in Italy by providing an affordable means of motor transport as well as becoming a symbol of freedom and independence in the newly emerging post war consumer society. Soon after, when they were introduced to Britain, becoming an integral part of British life and social fabric.

Scooters acquired a new identity in Britain in the early 60s when they were adopted by mods. Since then scooters have regularly been at the forefront of British style, ridden by different generations of scooterists from skinheads to scooter boys, mod revivalists to contemporary commuters – and still by the mods of today.

The exhibition includes a range of exhibits from the life of the British scooter – images and drawings of the earliest scooter models, advertising and posters from Innocenti and Piaggio, original films including those of scooter stunts and gymkhanas, photographs of scooterists past and present, "scooter" clothing (whatever that means) and accessories, plus a rare Vespa from 50s and an insight into scooter designs for the future. It also introduces some key personalities in scooter history such as Eddie Grimstead, the famous scooter workshop owner of the 1960s.

On the opening day of the exhibition, there will also be a scooter ride out which ends with a rally on the Piazza in front of the gallery from 12pm onwards. You’re more than welcome to join in. For more details on this, email [email protected]