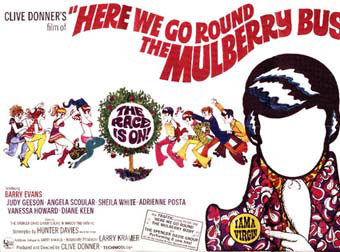 The Scenester skips along to the NFT to check out the showing of Here We Go Round The Mulberry Bush, complete with Hunter Davies Q&A.

What other decade could a film with the title Here We Go Round The Mulberry Bush possibly has been made in? It was probably unnecessary for our friends at the National Film Theatre to place it fairly, but not squarely, in the Psych Sunsplash 67 series, so evocative was that title.

A few of you VHS devotees may have picked up a copy from television many years ago, but for those of us who missed it, this nugget was a real treat. So with a spring in the step, I raced to the South Bank as soon as the 5:30 bell rang, and sank a swift one before diving into the fabulous NFT1, beneath London Bridge. Hunter Davies, a man who needs little introduction, was on hand to let us know how he came to write the novel this film was based on, even showing us his personal copy of the book, complete with appliqué lips on the cover that seemed to pucker up when you walked past it. If anyone out there in Modland has an original copy with these lips still intact, you’ve got a valuable artefact, as Hunter reckons that constant handling in the shop nearly always resulted in the lips falling off!

Hunter explained that he felt a little disappointed that the action in the film was not set in his native Carlisle, but moved south to a Newtown within the requisite few miles of London, so as to avoid having to pay the camera crew a greater daily rate. Also, many of the Brit cultural references and slang were toned down so as not to confuse our American cousins, where they felt it might have a market. A few more anecdotes and some remarkably well-remembered facts, and we were away.

Supports were provided by the NFT in the shape of a couple of shorts showing Valentines cards being received by the inexplicably popular Tony Blackburn and the star of the night’s film, Barry Evans. Silent, black and white, and unused for whatever TV spot they were intended for, they were interesting only for their rarity. However, the real deal was about to start, and the screen exploded into glorious colour! Opening with a quintessential 60s shot of a delivery boy riding his bike, bringing groceries to the locality and generally fantasising about every female of childbearing age he passes, is Barry Evans, a heartthrob of the 70s through the popular ‘Doctor in the House’ comedy series, and the politically dubious and less popular ‘Mind Your Language’. Looking about 16, exactly the age he’s playing, the story is basically a funny, touching, realistic portrayal of adolescent attitudes to love and sex, tempered with a brutal honesty about one young man’s (lack of) success with the girls of his dreams. His lairy mate, played by the ever-welcome Christopher Timothy, appears older, but attacks his part of school lover boy with relish.

The female cast put up marvellous performances, with such luminaries as the adorable Adrienne Posta as ‘runny Linda’ whom Evans inexplicably does not find attractive, in a series of cute outfits most of today’s mod girls would kill for, Angela Scoular as a spaced-out daughter of seriously decadent ‘aristo’ parents, and of course Judy Geeson, Evans’ main lust object.

The story follows Jamie McGregor (Evans) course through adolescence, fancying loads of girls who don’t notice him, and being fancied by loads he has no interest in (familiar to anyone out there?), going to church dances where the boys and girls canoodle when the lights get (deliberately) turned out for a moment, and later to an astonishing near-orgy in a carpet shop.

On learning of their exam success, our two male leads wind up doing a stint as a bus crew before they make off for college, the scene strongly resembling the lecherous pair in that other great comedy success of the 70s, ‘On The Buses’.

Jamie does eventually get a chance at the girl of his dreams, in a very daring – but chaste – nude scene, unfortunately, he’s too romantic and attached to her, and she returns to her one-night stands, leaving him disappointed with life in general and love in particular.

Newtown shopping centres have only looked this good once, with not a piece of litter to be seen, shops filled with, well, the stuff we trawl Ebay for, and the colours!

A supporting cast of well-meaning churchgoers, jaded parents and bemused locals add up to a great film, and why it isn’t generally available, is beyond me.

I’d also guess it’s the only film ever to proudly proclaim it was filmed on location in Stevenage!

A Q&A with Hunter followed, where he recalled in fine detail, how much he got paid for the rights, and what happened to some of the actors afterwards. You may be aware that Barry Evans died a few years ago, never attaining the height of popularity he had with the ‘Doctor’ series again, but you probably didn’t know, like me, that Judy Geeson now runs a boutique in Beverley Hills.

If you couldn’t make it, sorry, but you missed a fantastic show, and thanks to all the faces who did – keep your eyes peeled for more from the NFT!