The man some of the band regarded as the "fifth Beatle", Neil Aspinall, has died at the age of 66. 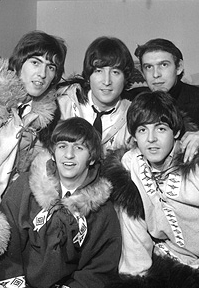 Aspinall, seen here on the right with the band in 1964, was responsible for running the Apple Corps empire, and it was he who was entrusted to protect The Beatles music and images copyright. He even played some instruments and sang vocals on tracks from the bands’ Revolver, Sgt. Peppers Lonely Hearts’ Club Band and Magical Mystery Tour albums.

As a childhood friend of Paul McCartney and George Harrison in the 1950s, he became the Beatles’ road manager in 1961 and drove them to gigs in his van, before later becoming their personal assistant. He was asked to oversee Apple Corps following Brian Epstein’s death in 1967 and he was chief executive there from 1970 until last year, when his health began to deteriorate. Aspinall also led the recent legal battle with Apple Computers over the use of the Apple name, and the battle over royalties against EMI. Outside of The Beatles he also created Standby Films
with his wife Suzy, responsible for the 1999 Jimi Hendrix film, Hendrix: Band Of
Gypsys.

He is survived by his wife Suzy and five children.